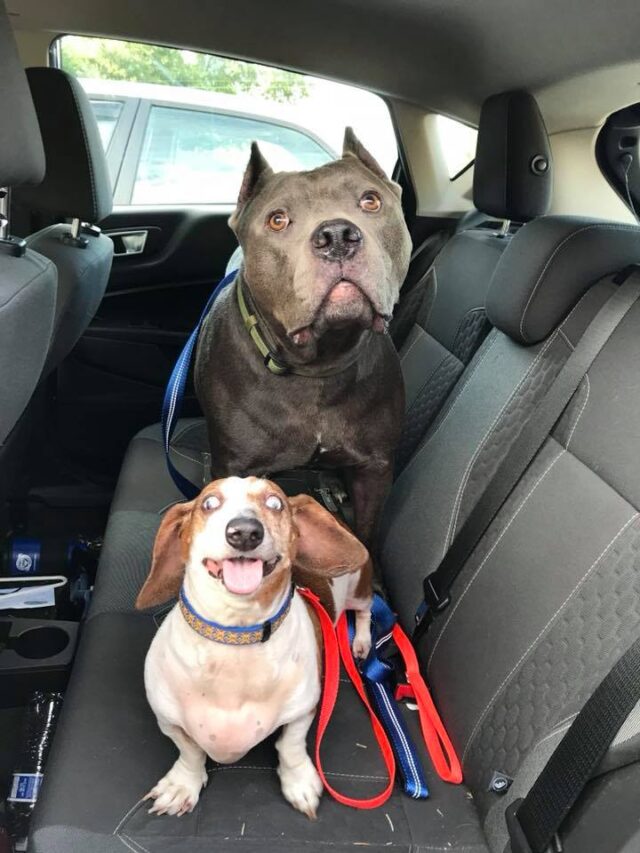 A month has passed since the bonded pair of dogs, Dozer the pit bull and OJ the blind Dachshund, were reunited at Richmond Animal Care Center (RACC) after a harrowing ordeal. They were almost separated from each other, but their friends at the shelter wouldn’t let that happen. Now, after weeks of not knowing their future, the two dogs are finally moving on.

After the incident that tore the two canine friends apart and left OJ callous on the side of the road, RACC staff knew that Dozer and OJ deserved a happy ending more than ever. The first adoption failed, but no one wanted to see Dozer and OJ spend their lives in a shelter. The adoption staff at RACC started from scratch, but this time they were extra vigilant about who they thought would be right for both Dozer and OJ.

RACC announced on Facebook that after giving the dogs time to decompress, they were reassessing applications for potential adopters. The Dozer and OJ story had made national headlines and there was no shortage of people willing to give them a good home. The problem was that while Dozer loves his friend OJ, he’s not a fan of other dogs. The duo needed a family that had no other pets and was willing to take the pit bull and senior dachshund as an inseparable package.

It took time and a lot of hard work by the shelter’s adoption coordinator, but in the end an application came in that looked perfect. The future family met the dogs, and on June 1, they finally went home. Dozer and OJ have finally found a family that loves them for all their quirks. The path has not been easy for the bonded couple, but they are finally on their way to a better life.

Life hadn’t been easy for a close-knit couple of dogs who surrendered to the Richmond Animal Care Center (RACC) last week, but at least they had each other.

At age 12, the Dachshund named OJ is blind and he relies on his best friend, a six-year-old Pit Bull named Blue Dozer, to be his eyes. They lived with a loving owner, but unexpected circumstances turn their world upside down. After they became homeless, their owner was no longer able to care for the two dogs. The linked duo were handed over to RACC – an urban shelter with a reputation for pushing animals to the limit.

The RACC staff recognized that the dogs were dependent on each other and were determined to keep OJ and Dozer together forever. They posted on Facebook and said:

“We can’t stand the cuteness and kindness these two share. Someone willing to love a bonded pair of perfection?

They wouldn’t adopt one without the other, and the story of the two completely different, yet very cute dogs, quickly went viral. Thousands of people read their stories and it wasn’t long before someone showed up at the shelter interested in meeting the famous couple. RACC was delighted to announce that both OJ and Blue Dozer were going home together, but they didn’t get the happy ending everyone was expecting.

On Tuesday, OJ showed up at Shenandoah Valley Animal Services nearly 100 miles away. The man who found him said the blind dog was wandering alone along a rural side road. He assumed he was a stray, but a microchip connected the dog to both RACC and the woman who recently adopted him.

When the shelter contacted OJ’s new owner, she reportedly told them that someone would be watching OJ for her. They offered to give the dog back to her, but she turned them down. She said the shelter could keep OJ, but Dozer was still in her care.

Separated, scared and in strange new environments, OJ and Dozer found themselves once again in a dire situation. But they were not alone. The teams from both the Shenandoah Valley Shelter and the RACC were determined to find a solution. Arrangements were made to transport OJ back to RACC, and shelter representatives begged the adopter in hopes of reuniting the dogs.

Despite their best efforts, the adopter initially refused to give up Dozer. She claimed she had done nothing wrong and wanted to keep the pit bull, but had decided she no longer wanted the blind senior dachshund. Concerned that Dozer was in trouble and concerned for OJ’s well-being, animal advocates from around the world didn’t give up.

In the end, ongoing pleas about how sudden separation would have traumatic consequences for both dogs convinced the woman to finally give in. RACC announced on their Facebook page that Dozer was voluntarily returned to the shelter. After transporting OJ back to RACC and welcoming Dozer through the doors again, the best of friends were successfully reunited. They are currently close to the shelter and are grateful to be together again.

Unfortunately, the ordeal that Dozer and OJ went through to stay together is common in shelters across the country. Organizations like RACC adopt thousands of dogs a year, and every now and then adopters lie about their intentions and act unpredictably. The RACC staff could not possibly have predicted the temporary separation of Dozer and OJ, but they are determined to do what is best for the dogs in the future.

The bonded dogs are resting in safety in the shelter. RACC was happy to announce their reunion on Facebook, but they are not rushing for another adoption. they wrote,

“We cannot consider decisions made by citizens after adoption and work diligently to keep our open adoption process successful. Ultimately, we have to trust people – trust that they love the pets we’ve taken care of, and trust that they’re doing what’s best. Finally, for the next few days, we won’t be doing anything with OJ and Dozer other than cuddling them together. I will keep you posted if and when they are available for adoption.”

OJ and Dozer didn’t get the happy ending they expected, but they’re not giving up hope. Their story is not over and the caring professionals at RACC will do everything in their power to ensure a happy, healthy future for the two dogs who mean so much to each other.