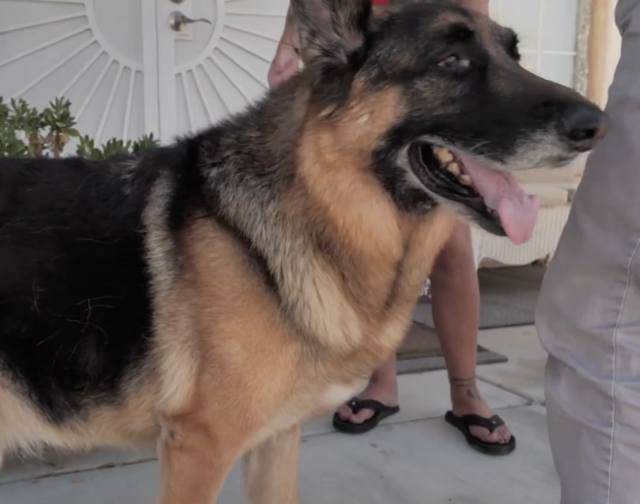 It seems highly unlikely to lose sight of an 87 pound dog on a walk. But when Lana Norman of Las Vegas was walking her German Shepherd named Riley at night, the dog suddenly disappeared. Riley fell into a rain drain that missed the grid and ended up several feet below the surface.

Norman tried to contact professionals for help, but when no one answered, her neighbor sprang into action. Not only was Norman terrified for her own dog’s safety, but she also feared that other pets and children would suffer the same fate. How often are these situations not reported?

help is not coming

Norman and Riley were walking around 7:15 PM. Seemingly out of nowhere, Riley fell into a small hole in the ground. There was an opening for the storm grate, which was partially covered with hay.

Riley landed about six feet below in an underground ditch full of trash. Norman immediately called 311 for emergency help, but no one picked up. So she tried to call 911, but they turned her down, saying they only handle human emergencies.

Then 911 sent Norman back to 311, who still didn’t answer. So Norman called everyone she could think of, hoping someone could help.

Fortunately a neighbor came by and saw how panicked Norman was. So they jumped into the opening and pulled Riley out without hesitation. Now Riley is safe, but Norman fears this is happening more often than she realized. Her dog is everything to her, but the hole can also endanger people.

Norman was shaking for hours afterwards. Riley is such a big part of her life and she’s thankful someone was willing to put themselves in danger to save him. She has no idea what would have happened if her neighbor hadn’t saved the day.

A week after the incident, she contacted officials about the danger. Shortly after, a piece of wood was placed over the hole. After speaking publicly about the situation, the county claimed the roster has now been replaced. However, Norman is still concerned that there are other dangers that have not been remedied.