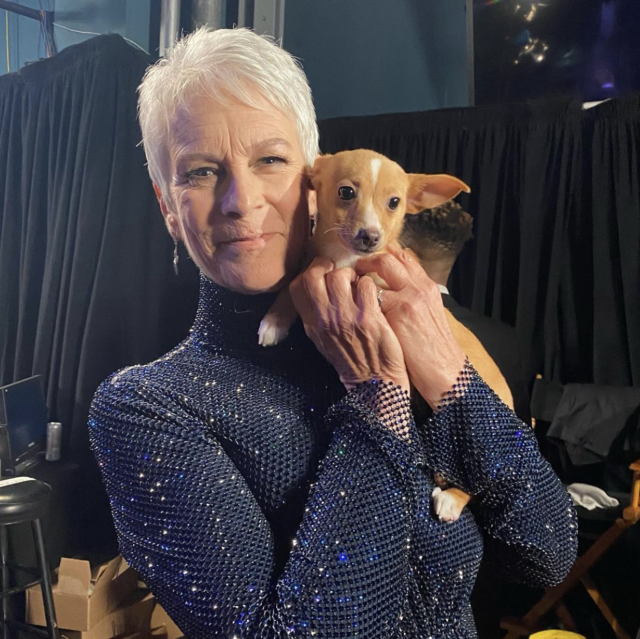 There’s been a lot of talk about the 2022 Oscars, but sadly, a lot of people seemed to forget a wonderful moment with Jamie Lee Curtis. The actress took the stage for a tribute to Betty White and she was accompanied by a small rescue dog named Mac & Cheese.

Because Betty White was a big supporter of animals, Curtis used that moment to encourage more people to adopt dogs in need like Mac & Cheese. Little did she know that someone had already fallen in love with the rescue puppy while she was backstage. Sometimes you meet the perfect dog for you when you least expect it!

Curtis was proud to share kind words about the late Betty White. The iconic actress died shortly before her 100th birthday, but her legacy lives on thanks to animal welfare. Many people have donated to animals in need and adopted pets in her honor. So Curtis talked about White’s love for rescue animals while keeping Mac & Cheese onstage.

“For nearly a century, she was a woman, day in and day out, who cared so much about not only her two-legged friends, but animals like these,” Curtis said.† “So the greatest gift you can give Betty White is to open your heart and your home and adopt a rescue dog, just like Mac & Cheese from (the nonprofit) Paw Works.”

Throughout the night, Curtis posted many photos of her with Mac & Cheese. But at one point, she also showed a heartwarming photo of John Travolta cuddling with the little pup. He met her shortly before presenting the Best Actor award. Curtis didn’t know that interaction would lead to a forever home for the dog.

A day after the Oscars aired, Curtis announced that Travolta and his son decided to adopt Mac & Cheese. She and Travolta both posted a photo of the puppy with her new family. Curtis said this adoption is a perfect example of what White would have wanted.

“I loved seeing him with her, and today I found out that he and his son, Ben, have adopted the beautiful little Mac & Cheese and are taking her home today. It’s an emotional ending and a perfect tribute to Betty White,” Curtis wrote on Instagram.

Mac & Cheese joins the two other pets in Travolta’s family: a poodle mix named Jinx and a cat named Crystal. She is such a happy puppy, but there are still millions of homeless animals. So if you want to honor Betty White, consider adopting an animal in need. If you can’t do that, other methods like nurturing, volunteering, donating and spreading the word can all make a big difference too!