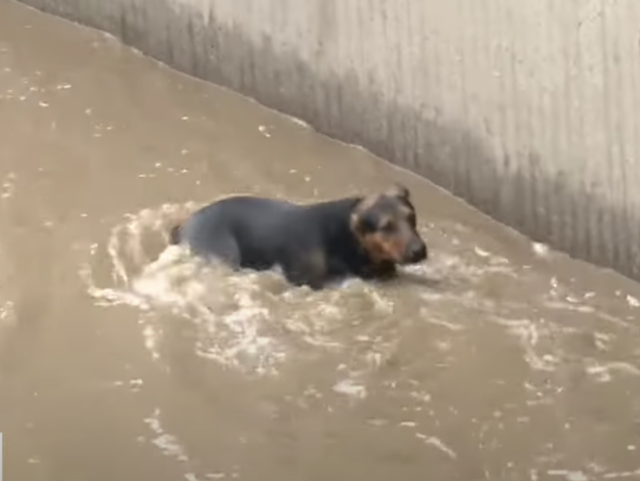 When a dog is in danger, most people want to come to the rescue. But in some scenarios, rescuing the dog just puts you at risk. During rescues in the water, officials urge the public to call for help rather than trying to rescue themselves.

A dog was swept away by the rushing waters of the Los Angeles River, endangering two people. It took at least two hours, but the fire service was able to save the dog and everyone involved.

It’s unclear how it happened, but the Los Angeles Fire Department received several reports of a woman and her dog trapped in the river. The dog probably fell in, so his owner went after him. The dog’s owner, a 35-year-old woman, was rescued within half an hour, but the dog was hesitant to get help.

While firefighters tried to save the dog, a man jumped into the water after the dog. He didn’t know the dog, but he wanted to help in any way he could. Unfortunately, the puppy was so scared that it bit the man who was trying to save it. So the man was forced to let go of the dog and send the puppy further down the river.

Because the man was now in danger, rescuers had to focus on saving him before returning to the dog. Although the man had good intentions, he eventually became another victim who had to be rescued. Rescuers were able to lift the man to the coast by helicopter.

“We know that person was well-intentioned and other people are clearly very concerned about that dog, you better believe we are too. But when civilians step in who don’t have the proper personal protective equipment and training to make a rescue they often become patients themselves,” says Captain II Erik Scott.

When the man was safe, firefighters returned to help the dog. No matter how many times they tried to save the dog, the puppy always fought back out of fear. The rescue team explained that such problems are common when rescuing dogs, making it more difficult for them to help.

“The poor dog was very tired, very scared, and the more people around, the more scared he got, and he bit that well-meaning 28-year-old man who was trying to help him, and that’s another reason we want to not that people are jumping for these canines because they’re obviously scared,” Scott said.

RELATED: People Team Up to Save Animals During Catastrophic Hurricane Harvey

Firefighters refused to give up. After about two hours of trying to save the dog, they finally pulled him to safety. Although incredibly fearful, the dog was unharmed. His owner was also fine, but the man who jumped in had to be taken to hospital with minor injuries.

Keeping your dog away from fast-flowing water is the best way to protect him, but if he does fall in, it’s best to call for help. It’s tempting to jump after them, but that could slow down the rescue process, because in situations like these, officials need to rescue people rather than dogs. So keep that in mind if you and your pup ever face a stressful situation like this.