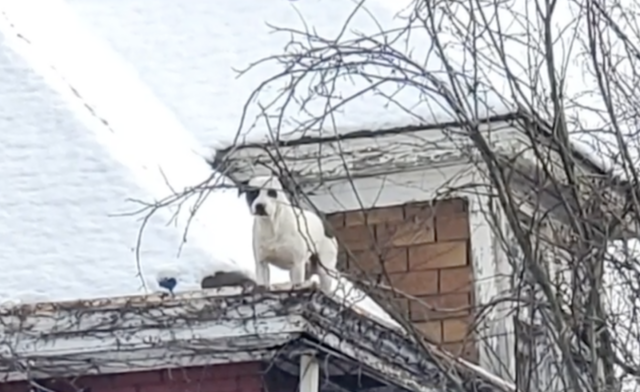 A neighbor named Kori, who lives across the street from an abandoned house, recently heard a dog barking and howling on the roof of the third floor. The dog would come out through a broken window and cry for help day and night. So the neighbor got help from the community to save the helpless pup.

It turned out that three large dogs had been left in the house in appalling conditions. It is suspected that they were alone in the building for about three weeks. If that one dog hadn’t gotten the neighbors’ attention, none of them would have survived.

A cry for help

The three dogs were alone in a house in the Knoxville neighborhood of Pittsburgh. They were very smart and knew they had to get out of there, so a white dog with dark spots started calling for help.

“It was all a cry for help,” Kori said. “Everyone walked by, he’s out on the roof, crying, barking trying to get someone’s attention, just to get out of the house.”

Pittsburgh officer Christine Luffey, who specializes in animal cruelty situations, became involved. First she put a note on the door. When no one took it, her supervisor agreed that they should remove the dogs for their safety. When Luffey entered the house, she was shocked by the appalling conditions.

The floors of the house were covered with garbage and animal waste. There were no water bowls for the dogs and there was only one food bag, but it was covered in rubbish. On the second floor were a few cans of dog food with chew marks. It was clear that the dogs were starving and dehydrated.

After witnessing the inappropriate living space, officials removed all three dogs from the home. They took them to Humane Animal Rescue in Pittsburgh, where they were given food, water, and vaccinations. Luffey thanks the neighbors for saving the dog’s life. They saw something disturbing, so they spoke out.

“I’m very happy that the dogs are getting treatment and hopefully a family will adopt them and love them as much as I’ve come to love them,” Kori said. “I’m so grateful to Agent Luffey with Zone 3, she’s amazing and I thank her for doing what she did to get them out of this house.”

Police are currently trying to contact the owners to get them to relinquish ownership of the dogs. Then the dogs go up for adoption. The dogs are expected to make a full recovery and the person responsible will likely be charged. After all, neglect can be just as serious as other forms of animal cruelty.